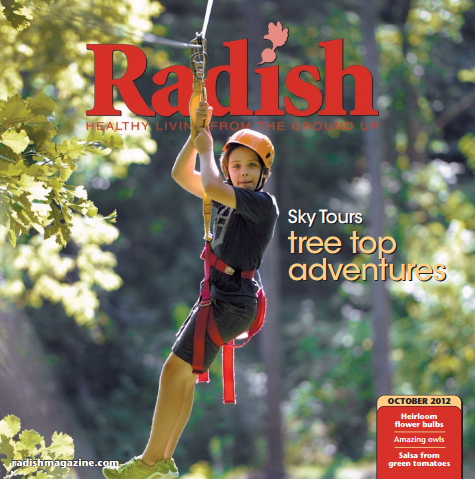 [Sep 27, 2012 09:04AM]  Ask Kevin Hougham what he likes about Sky Tours, the zipline operation he helped get off the ground — quite literally — at YMCA Union Park Camp in Dubuque, Iowa, and he doesn't hesitate a moment before explaining it's "that families do it together, and it's multigenerational."

Since Sky Tours opened to the public last year, Hougham says parents, grandparents, even the occasional great-grandparent, all have come to the course with their youngsters to zip through the treetops in the historic park. "We get a lot of families with teenagers, and the teenagers have fun, and the parents have fun with them, and they're in the woods for two hours together. … As a YMCA, we just really appreciate the fact that it's one thing that families can do together and everyone has a good time."

That certainly seemed to be the case on the day I was one of nearly a dozen people taking the two-hour, seven-zipline outing offered by Sky Tours. For Gabby Lucas of Des Moines, who was there with her brother, Tommy, and her grandparents, Tom and Ruth Lucas of Dyersville, Iowa, the reason for taking the tour couldn't have been clearer. "We all like being in the woods," she explained. "This is a way to experience the woods from new heights."

There was no arguing that's what they were in for: The ziplines, which range in length from 300 feet to a whopping 800 feet long, are as high as 60 feet off the ground.
Taking the plunge

After a brief orientation in one of the camp's former bunkhouses, we all were outfitted in "sit" harnesses (fitted around your hips and upper thighs to allow you to sit as you coast on the line) and helmets. Then we walked a short distance to the platform with our two affable guides, Dusty Collins and Silas Langlois.

As we walked, it struck me how much this was like any other stroll through the woods — the dappled light, the crunch of leaves under foot, the rhythmic chorus of insects. But then there was also the steady metallic clank of carabiners and pulleys hanging at our hips, an inescapable reminder that this hike would end at the top a bluff. At which point, we'd jump off.

The fact that she was there to celebrate her birthday didn't prevent Lorene Anderson of LeClaire, Iowa, from having a few pre-flight jitters. "My heart was going boom-boom-boom. My legs were wobbling," she said as she described stepping onto the first platform.

Not to worry, assured Collins. "Putting on the harness is probably the hardest thing you'll do today — at least on the tour," he laughed. After he affixed the pulleys and carabiners to the zipline, it was just a matter of "running off, jumping off, walking off, whatever you like," and then gravity would do the work.

One by one we each stepped to the platform, got attached to the line, and took off — disappearing in a blink through the canopy of leaves. We could tell when someone arrived at the other side by the eruption of laughter and cheers heard across the gap in between.

The next two hours passed in a whir. Over the course of the tour, we zipped over ruins from the park's earlier days as a resort. Our guides talked about the history of the grounds and pointed out notable landmarks, including spots where once stood a dancehall and trolley station.

On the fifth line, we all were issued small beanie animals and invited to drop them in a bucket as we zipped over it — anyone who succeeded would get a free T-shirt. But it was the seventh and final line that Hougham told me was the most popular, and it was easy to see why. Two ziplines are strung parallel to each other for this final run, allowing visitors to pair off and "race" to the other side.

Once more, at nightI had so much fun on the first tour, I couldn't resist returning a second time two weeks later with a friend to try the course at night. On full-moon weekends, Sky Tours takes groups of a half-dozen people on the same course. A small button light is attached to your harness to make you visible to the guides, and a headlight is put on the helmet to use on the hikes between platforms, but for the most part you run the course in the dark.

"It feels faster in the dark — it isn't, but it feels that way," said Hougham, describing the night tour as a "totally different experience." He was right. I couldn't see the ground below as I zipped through the trees, so the sense of being high up was muted, but in its place there was a heightened sense of velocity. When I broke from the dark cover of the canopy into the moonlit space of the valley, the experience caused me to catch my breath. So did the deer we spotted walking across the path, and the owl we heard hooting off in the trees.

Sky Tours offers outings at 10 a.m., 1 p.m. and 4 p.m. on Saturdays and at 10 a.m. and 1 p.m. on Sundays, Mondays, Wednesdays and Fridays through October. (Tours run daily during the summer months.) It costs $75 to take the tour, $65 for Iowa residents, and $60 for members of any YMCA. "The money it makes goes to the Y, which is good for the community," Hougham explained. In other words, the cost of your adventure supports family health programs in Dubuque — something to feel good about as you zoom through the canopy.