Union Park, the site for the Sky Tours Zipline, has had a rich and interesting history over its 12 decades of existence: Over the years, it has evolved from farmland to Stewart Park to Union Park to Y Camp to the addition of a Zipline Eco-Adventure. In many ways, the development of Union Park more than a century ago, seems to have served as a precursor to the depth of interest in culture and the arts that Dubuque reveals today. That this Midwestern community of just under 60,000 currently boasts its own symphony orchestra, ballet company, art museum, and a Smithsonian-affiliated museum and aquarium is remarkable.

The idea of Union Park began more than 120 years ago in the mind’s eye of Dubuque citizen William G. Stewart. Stewart’s generosity and vision for the land were essential for the concept to become reality. In the years following his initial land gift to the city, other individuals and companies would become part of the production and play large and varying roles.

A timeline of the major actions and events relating to Union Park follows:

1890. William G. Stewart donated several acres of farmland to the city with hopes of creating a place where Dubuque families could have outings.

March 6, 1891. The Dubuque Electric Railway Light and Power Company, known locally as the Allen and Swiney Motor Line Company, purchased an additional forty acres of land from Stewart’s farm. The company’s goal was to publicize the use of electricity through a means of transportation they used around the city: trolleys. They hoped their idea of a park at the end of their trolley line would give them the needed publicity. For purposes of their ultimate goal, it met with limited success.

April 26, 1891. The park officially opened. A fee of 10¢ delivered the first visitors by trolley to the then-named Stewart Park, snuggled in Horseshoe Hollow. [The return trip cost 15¢.]

May 11, 1893. Money soon became an impossible obstacle for the park's owners. Unable to operate a trolley line and a park, Allen and Swiney sold out to the Old Colony Trust Company.

1900. A cave was discovered. In years to come, a casual walk through the cave offered some momentary respite from steamy August days. The cave was modernized in 1908 with the addition of a walkway and electric lights. 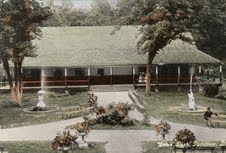 1904. Dirt trails and paths were replaced with cement sidewalks (image at left) that ran from the loading platform to all the buildings. The construction of a new dance hall, known as The Pavilion, was a major event. Visitors to the park were also impressed when the loading platform, little more than a dock, was replaced by an elaborate shelter (image at lower right) that protected visitors from inclement weather. 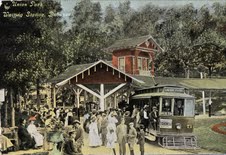 1905. A unique bandstand made of gnarled tree branches was constructed.

1907. A second bandstand of the same design was built farther into the valley with hundreds of benches nearby. Grand concerts from this bandstand were held on a regular basis each week. [Newspaper accounts from the time tell of the bands and orchestras being paid from $2,500 to $5,000 weekly. The bandstand was also the setting for many high school and college graduations.]

1908. More land was purchased; a children's playground was developed that offered a variety of equipment including slides, swings and carousels. A wooden roller coaster was constructed.

1909. The Mammoth Theater (image at left), advertised as the largest in the West, was built. Costing Union Electric $30,000 to construct, the Mammoth Theater stretched from one hillside to the other dividing the park into two parts. Anticipating large crowds, 1,500 opera chairs were installed. The theater, designed carefully for excellent acoustics, was open at one end, allowing an additional 5,000 people to see and hear (at no charge) the musical programs. [Seating inside the theater: Depending on the program and time of day, sitting in the opera seats cost audience members ten to fifteen cents; benches set up behind the opera seats cost five to ten cents.]

1910. A children's wading pool was added. (See image at right.) [It was modeled after, and constructed as a miniature of, the internationally known wading pool in Chicago's Ogdon Park.]

1911 to 1919. Park use flourished. In 1916 Union Electric Company assets were sold to the Dubuque Electric Company, but continued attention to beautifying the area led the park to remain one of eastern Iowa's most popular and enchanting settings.

July 9, 1919. Weather predictions called for possible thunderstorms on this Wednesday afternoon, but usual summer activities were continued as planned. The first drops of rain in the afternoon quickly turned into a downpour. Picnickers, still feeling secure, ran for nearby shelter, unaware that the cloudburst had created a wall of water that soon tore into the park. The Mammoth Theater, which stretched across the valley, inadvertently served as a dam, blocking the water’s dispersion and making the flood worse. Concrete sidewalks were ripped up by the fury of the torrent. The massive wall of water demolished the merry-go-round and backed up behind the theater to a height estimated to be twenty feet before pushing on downhill. According to the National Weather Bureau, 3.87 inches of rain fell that afternoon, most in less than a two-hour period. Five people died that day at Union Park, and an estimated $15,000 in damage was done.

July 13, 1919. Although none of the debris had yet been removed, Union Park reopened to the public. Visitors were given the opportunity to view the massive damage done by the floodwaters. Plans were developed and rebuilding efforts began immediately.

July 26, 1923. A dance pavilion was rebuilt using the floor from the Mammoth Theater. This ballroom was advertised as the largest in Iowa.

Later in 1923. A 50-foot-by-150-foot Olympic-sized swimming pool, said to be able to hold 2,000 bathers, was constructed to attract residents back to the park. The popular Pavilion was converted into a roller-rink.

Despite best attempts to rekindle interest in Union Park, those efforts failed as attendance remained low. Of concern to Dubuque Electric Company, the park owners at the time, was the appearance of automobiles in Dubuque. Vehicles permitted Dubuque residents, once confined to Dubuque and its attractions, to travel outside the city. Union Park also suffered from the opening, in 1907, of Eagle Point Park, a 133-acre public park and recreation area overlooking the Zebulon Pike Lock and Dam (Lock and Dam No. 11) on the Mississippi River.

1935. Park buildings were dismantled. Union Park's dance hall was reassembled (as the popular Melody Mill) on Sageville Road near the intersection of Highway 52/Northwest Arterial/John F. Kennedy Road. For safety, the cave entrance was blasted shut. Wood from the roller coaster was made into a barn.

September 5, 1946. The YMCA and the Boy Scouts purchased the land; cabins were constructed on the hillsides, along with a mess hall, swimming pool, stables, and bathrooms. [Soon after the completion of the project, the Scouts chose to erect their own campgrounds, leaving the YMCA with the 100-acre Union Park property.]

Early 2010. The Dubuque Community Y began discussing the possibility of expanding the land use of Union Park with a zipline tour.

May 2011. Construction of the Sky Tours Zipline was completed; guides were trained and certified; and the zipline was opened to the public for business.