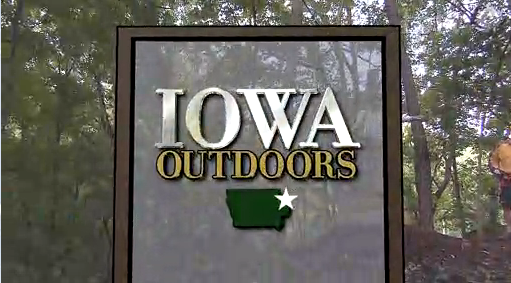 Video transcript. (Click on the Iowa Outdoors image above to view actual video.)

The hum of Iowans flying through the treetops is now commonplace on the ridgeline of Dubuque.

With lengths varying from 300 to 800 feet, Sky Tours Iowa has created a premier zip course for young and old.

Toby Wisecup: Our only limitations are because this is a gravity zip line is that you can't weigh more than 270 pounds and you can't weigh less than 70 pounds but any age can come out here and enjoy it.  It is designed to be an experience to have an opportunity to be outside, to be outside with your friends, your family and to just enjoy the experience.

The gravity course begins with a pair of simple zips…aptly named “bunny & rabbit run”.  Each was designed to ease first-timers into walking off an Iowa slope.   Those first steps above the timbered valley build confidence for the most novice visitors…even if their faces don’t show it yet.

Next up on the Sky Tours course is “Skyline.”  A hillside platform seems introductory enough until you begin a 400-foot land-to-tower flight.   The destination?  Sky Tours’ Lookout Tower and its panoramic view of Horseshoe Hollow.  The tour’s sole tower also begins a trek back in time. The valley below includes relics from the early 1900’s and a tale of triumph and tragedy.

From farmland to parkland to The Mammoth Theater, this location in the hills above Dubuque serves as an Iowa touchstone.  Its story begins more than 120 years ago.

In 1891, a Dubuque farmer sold a parcel of his land to a local electric company that would later be known as General Electric…then Union Electric.  The company would spend $30,000 to construct the Mammoth Theater in this picturesque valley AND claim the venue as the largest west of the Mississippi.

The Mammoth Theater allowed people to see and hear musical programs free of charge.   For 10-cents per person, a local trolley system shuttled visitors back and forth from downtown Dubuque to northeast Iowa’s premiere entertainment destination.

Sue Boelk, Local Historian: There were approximately 1500 viewers of whatever shows they had going on.  They had Vaudeville, different plays, acts, Guy Lombardo, a lot of big time bands and that were down here.  And it’s interesting because the way you see the theater now you’re only seeing half of it.  The way it stood when the park was open it had spanned the valley and the backside of it, which would have been over on this side, was open so you could sit on bleachers up on the hillside and view whatever entertainment was inside for free.

Swimming and wading pools lured families to spend fair-weather days at what was known as Union Park.   The valley was an embodiment of early-1900’s idealism…and tragically the location of shocking heartbreak.

On July 9, 1919, potential rain showers turned into a rapid downpour on the ridgeline above the Mississippi.  The Mammoth Theater inadvertently served as a dam, blocking the liquid’s dispersion and creating a 20-foot high wall-of-water destined for destruction.  The valley flooded…some were unable to escape…five park visitors perished.  In less than two hours, nearly four inches of rain fell that afternoon in 1919.   It was the beginning of the end for Union Park.

Sue Boelk:  People were a little leery about coming back out here then but a lot of it was attributed to Eagle Point Park opened up.  So there was another attraction to go to.  The car was more affordable so people wanted to go to other locations and that.

The tale of Union Park is perhaps the greatest surprise in the Sky Tours course.  More than a zipline and hiking tour…visitors literally fly over history and a time long forgotten but still visible to the naked eye.

Toby Wisecup: And that is part of the design of the layout of our zip line is to be able to identify the artifacts in the park so we can tell the history of this.  A fascinating history that has been - that was a big part of Dubuque for over forty years.

Without massive theaters, rain water can flow naturally through this valley and visitors safely travel with trained zip guides.  On Lookout Tower, you’ll see the original foundation of Mammoth Theater…45 feet above the river valley. And with no other option but zipping back to the ridgeline, the course continues.

The next zips, known as “Air Strike” and “Ground Speed” take visitors deep into the valley timber for lines that hug between the treetops.  One last hike to high ground brings the tour to its conclusion and the longest line of them all.  The duel zip line is 800 feet - nearly three football fields long – allowing friends to zip side-by-side across the valley.

Toby Wisecup:  It’s been great for our community.  It has been great for the kids.  We have had many opportunities.  We are even collaborating with the public school system to bring the kids in here and do some teamwork and just have a good time out here in the park.

It seems there is something for everyone in the treetops above Dubuque…action, outdoor exploration, and history for the entire family.