The event at the YMCA camp features the highest, fastest and longest zip line in Iowa.

It was Round 2 for Maquoketa, Iowa, sisters Dani and Reba Laughlin. Both enjoyed their first-ever experience of "flying," but Dani a bit more.

The Laughlins joined hundreds from around the tri-states Saturday for the Fly into Fall event at a zipline at YMCA Camp, 11764 Kennedy Road.

The base price for a ride of the Dubuque Community Y’s seven-canopy zipline tours, dubbed Sky tours, is $75 per person, but the Y opened one of it lines – “the Duel,” dubbed the highest, fastest and longest zipline in Iowa – for $10 per person to benefit the Dubuque County Conservation Board. The Duel features 800-foot-long, side-by-side lines 45 feet off the ground. 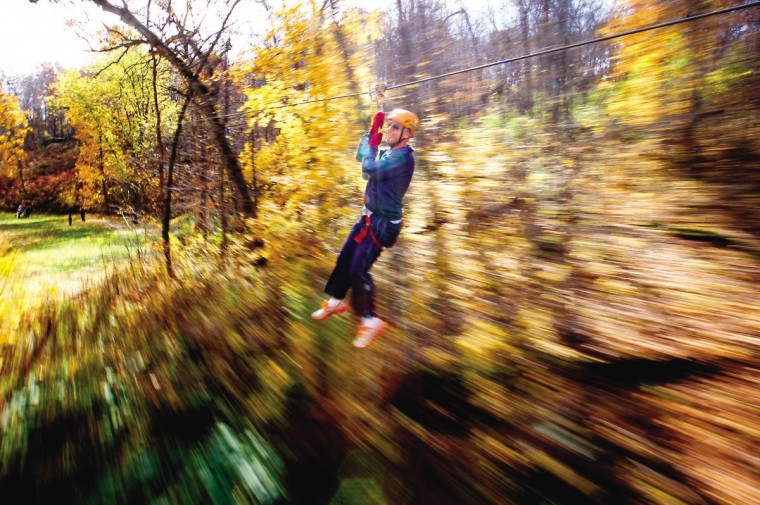 A steady stream of nature and zip-enthusiasts entered the camp Saturday, some even before the official 9 a.m. start time. A total of 601 people took part.

“I thought if we could get 400 riders it would have been a great day for us,” said Russ Ginter, with the Friends of the Conservation Board. “This was above and beyond.”

After signing liability waiver and being properly harnessed, participants walked approximately a half-mile through the woods to the drop zone. Zipliners had to weigh between 60 and 270 pounds. Some like Madie Vosberg, 10, and her two younger sisters, all of whom stretched the 60-pound minimum, came back for a discounted second ride.

What made it so much fun? “Not the hike,” said Madie, breathing heaviliy after racing back to the dismount area.

Some zipliners ran off the edge of the beginning platform. Others were propelled. A few just picked up their feet and hung on. The screams were mainly for dramatic effect.

Angel Paris, of Manchester, Iowa, came with some friends to celebrate a birthday.

“I think we should have had the drinks first,” Paris said with a laugh, looking at the ground far below. 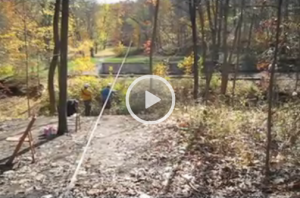 Dan Swiderski, visiting from Wisconsin, watched the riders from the valley below while holding his 3-year-old grandson, Charlie.

“How many times can you say you saw some people fly?” he asked Charlie, whose eyes were fixated above.

The conservation board will use the money from Fly into Fall to purchase a maple evaporator. The machine, which turns sap into maple syrup, will be used as an educational device and for future fundraising events. It’s kind of a lost art,” said Brian Preston, executive director of the Dubuque County Conservation Board. “We are all about the wise use of natural resources, and that’s a great use. It doesn’t harm the tree at all. And (the syrup) is great on vanilla ice cream.”